WordPress for iOS: it so nearly works

Please ignore any unusual formatting in this post: I am testing the latest version of WordPress for iOS.

промокоды ламода
olymptrade отзывы
דרכון פורטוגלי portuguese-passport.online
As I type, it appears as though I have managed to log-in to my blog, create a new post and upload a couple of screen captures from my iPhone’s camera roll.

I first installed WordPress for iOS around the time the iPhone 3G was released. At the time, the app wouldn’t even let me log into my blog without churning out a load of errors.

When the 3G-S was released I tried again, only to find I was limited to reading, approving or rejecting comments. WordPress was no more stable on the iPhone 4, although that was on iOS 4.

I think I can say that (I haven’t pressed submit yet…) WordPress for iOS 5 actually works. Here goes…..

Unlike previous versions of WordPress for iOS, I was able to log-into my blog and begin editing a new post. Sadly, the good stuff ends there.

While the images have found their way onto my server, they were in the main ‘WP-Content’ folder. This wouldn’t be an issue except for the fact WordPress for iOS set the image location as WP-Content/2011/11/[File Name]. Consequently, the images appeared as broken links in the pre-edited version.

Other than that, WordPress for iOS 5 shows a misleading error message when you try to submit a new post. While it may tell you that the post has failed, it will actually be posted to your blog each and every time you hit submit. Thankfully I was able to remove the 9 duplicate copies relatively quickly this morning!

Maybe WordPress for iOS 5.x will be 100% functional, however I would advise against holding your breath. 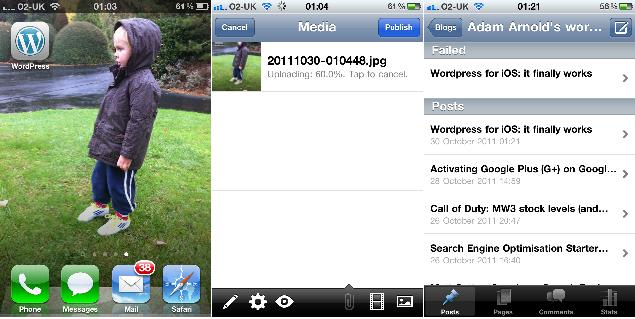 Wordpress for iOS (still not quite right)