алиэкспресс на русском
тут
Portuguese-passport.online/passport.html
I hope this post proves useful for anyone who plays Call of Duty: Modern Warfare 3 and has failed to receive a prestige token after entering prestige mode.

For those of you who don’t know what this means and are still reading, all Call of Duty games involve a system that allows players to ‘rank up’ as they invest more time in the game. Whilst it may appear to be an indication of skill, it is really just a measure of how long someone has been playing the game (although better players do tend to rank up faster).

Prestige mode isn’t a new concept, although Infinity Ward and Sledgehammer games have tried to mix it up a little bit for Modern Warfare 3. Previously, entering prestige mode would reward the player with an additional emblem and, occasionally, an additional class slot. For example, in Modern Warfare 2, extra class slots were obtained at prestige levels 1, 3, 5, 7 and 9.

Unfortunately some players have experienced problems when entering prestige mode and, sadly, I am one of those. Somehow data gets corrupted and the prestige token doesn’t show up in the prestige shop.

I did some Googling in an attempt to find a solution but all I could find were numerous forum posts ranting and raving at the developers. To be honest, I’m a bit too old for that kind of thing so I kept looking.

Activision were really quick to respond and offer up their apologies. Unfortunately, they went on to acknowledge that they don’t yet have a solution and can’t say how long that may take. Their advice: sit tight.

A couple more messages were exchanged and my request is now being looked at by someone more senior. In effect, I have asked for permission to use the prestige token glitch……

Whenever any new Call of Duty title is released people will start to find (and I suspect, some go looking for) glitches in the game code. The most common of these is the ability to get outside/above/under the designated maps. I’m pleased to note this kind of thing has been patched before most of us even knew there was a problem.

It seems that new features bring new glitches and the prestige shop is no exception. As per the video below, it is now possible to obtain unlimited tokens in the prestige shop. The only requirement is that you have one spare token lying around:

As this is a glitch (and not a hack) is is unlikely that you will find yourself banned from the MW3 servers for using it. However, it is quite possible that you will have your stats/rank reset if the developers decide to take action.

In any case, I haven’t done this – yet. Fingers crossed Activision give me permission to do this and I can get the extra class slot that I need. I have no intention of abusing the system but each to their own.

Shortly after I posted this entry, Robert Bowling tweeted the following: 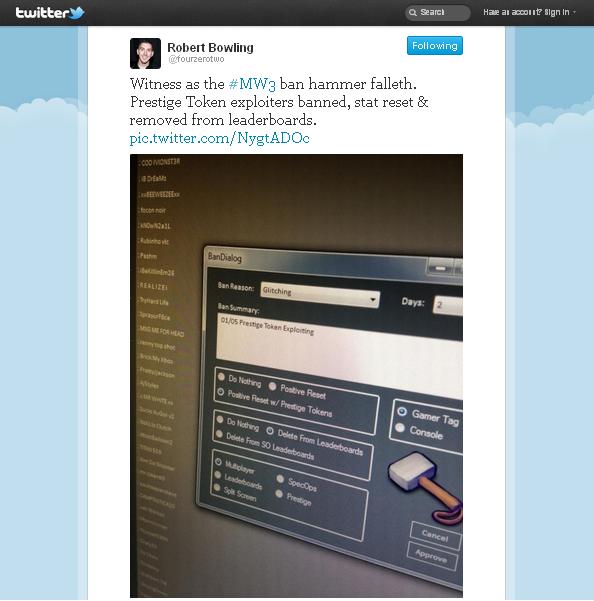 Have you been penalised? Please let me know in the comments.