вествинг
отзывы о биномо
אבא הלל 7
When Facebook first became available it was only available to university students and this was very appealing. Obviously, distributing invites around university students was a clever way to quickly expand Facebook’s user base and before long, they opened it up to the masses.

My Facebook friends list is now a cluttered mix of friends, work colleagues, random associates and people I went to school with but haven’t spoken to in over a decade. I’d be tempted to go one step further and say my Facebook friends list is pretty much everyone I know, with the exception of a few ‘older’ relatives and my ex-wife (who has me blocked :p). Consequently, I’m very careful about the information I post.

Google acknowledges the fact that people wish to share different information with different groups of people and so they created circles.  Having used circles for a week now, I can say they do the job they’re supposed to.

Assuming Google doesn’t fall into the trap of offering third party applications, I can’t see it being long before the majority of business folk make the switch. I for one really hope I never see tripe like Farmville on my Google Plus feed!

Google Plus: some numbers

According to this article on Sky News, G+ has picked up 20 million users in less than three weeks. Credit goes to Leon Håland for comparing this to Facebook and Twitter: 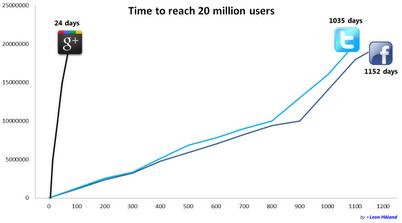 It’s also interesting to note that at least 75% of Google Plus users are male and in the technology sector.

For a limited time, you can secure an invite to G+ by following this link. Once you’ve signed up, feel free to connect with me at gplus.to/AdamArnold.