Where did on.box.tv go? No bother…

ebay на русском языке
зайти
Portuguese-Passport.online
Until around noon today I had a rather useful application, on.box.tv, which was free from the App Store and provided tv listings direct to the iPhone. Knowing the mighty Aston Villa were playing Manchester United this afternoon, I wanted to see whether or not the game would be on Sky Sports. Typically, Setanta have nabbed the rights (why won’t they offer pay per game?) so I was unable to view the action until Match of the Day aired on BBC1.

For reasons that have now become clear, the on.box.tv stopped working so I thought I’d quickly delete and then download again, which has solved the very few and far between problems I have had with other applications since owning the iPhone.

Unable to find the program in the App Store, I searched for other TV listings application. No free ones were available, so being tight I thought I’d look for another solution.

A quick scout of Google brought up a TV guide optimised for the iPhone but rather than create a bookmark in Safari I chose to create a shortcut in the menu screen: 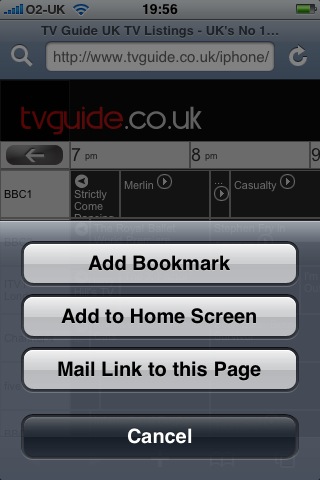